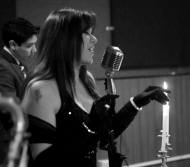 Hailing from the land of the Incas, Peru, Cecilia Alessandra has gained notoriety as well as a loyal following, as a contemporary, versatile and in-demand vocalist on the Peruvian music scene.

She began her professional career in Rio de Janeiro, Brazil, performing with Iconic singer, Roberto Carlos. After this rich experience, Cecilia started to perform successfully in hotels, private clubs and auditoriums in her native country.

With her very suggestive and characteristic vocals, and even as her triumphant album, CAUDALOSA, a sort of Peruvian fusion but including contemporary sounds still echoed sweet melodies in our ears, Cecilia Alessandra produced in 2010 another masterpiece: HIJA DEL VIENTO (Wind's Daughter), a production with original musical arrangements resulting in a very original sounding album, rich in text and alive with sounds that has the power of transporting its listeners to far away, real as well as imaginary places, by combining the perfect blend of blues, african beats and peruvian coastal rhythms.

The end result is a remarkable fusion of music all her own. Transcending cultures, traveling oceans until caressing the roots of flamenco, smooth like the wind, thus… HIJA DEL VIENTO, was born.

Cecilia, as well as her HIJA DEL VIENTO album, received accolades from many sources in Lima, Peru, as well as won awards from the Best Latin Jazz Corner website in USA, at their annual "THE LATIN JAZZ CORNER BEST OF THE YEAR AWARDS". She won in the categories of: "Best Next Generation Artist of the Year" and "Best Afro-Peruvian Jazz Album of the year".

“The biggest discovery for me was when I began to uncover my own roots and to feel what runs deepest within me. I want to tell stories of simple people from my native land, our coastal areas, mountains, forests and then return to all which is familiar. This is the way I envision it and I will follow it. And to achieve what I envision, and create something genuine and original, I must be free to sing a standard song with variations of Waltz, or a Waltz with Swing undertones, but the final result will always be the same: Music that comes from my vocal cords to your ears and hopefully they will also find a place in your heart”.

Without losing your particular jazz style, Cecilia has attempted precisely this: to return to the source, to her roots!

Cecilia Alessandra possesses one of Peru’s more intense and fresh voices to come in a very long time. With her very own style and her electrifying charm, she has garnered the attention and affection from everybody who has listened to her singing.

With her explosive blending of afroperuvian jazz, she has also toured North, South America and Europe, singing at international festivals and varied venues.